Every year kids and some adults dress up in costume for a night of trick-or-treating and revelry.  We accept this as a normal behavior, but how did this tradition come to be?

Halloween dates back to the ancient Celtic festival of Samhain. Two thousand years ago, the Celts, who lived in the area that is now Ireland, the United Kingdom and northern France, celebrated their new year on November 1.   On October 31, they celebrated Samhain, the summer’s end, a day of celebration before the long cold days of winter, which brought the death of nature, life and the harvest.

During the 16th century, this festival included mumming and guising, in which people would go door-to-door dressed in costume and perform a song or recite a poem in exchange for food.  It is often thought that this tradition originally began with people impersonating the souls of the dead and received the offerings on their behalf.  It was believed that wearing a costume would offer protection from these dead souls.  It was thought that the mummers and guisers were the old spirits of winter and would give good fortune in exchange for a reward.

The first recorded incident of children trick-or-treating in North America occurred in 1911.  In order to conform to Victorian era morality, Halloween became more of a private holiday and only children celebrated the festival.  Halloween was considered to be a rather dark and gothic holiday with costumes made at home.  As trick-or-treating gained in popularity during the 1930’s the first mass-produced costumes became available.

Most often, Halloween costumes depict a scary monsters such as vampires, ghosts or witches.  Extremely popular are superhero characters and pop culture figures.  Another costume trend are characters from our favorite movie or television show.

My most memorable Halloween costume is Pammy Panda.  My oldest daughter absolutely loved the animated series “Shirt Tales”, which aired during the early 1980’s.  She simply just had to be Pammy Panda.  I was unable to find this costume in any store, and was only able to come up with a sewing pattern.  My skills as a seamstress have always been rather limited, but I gave it the old college try.  It was the most complicated sewing project and Halloween costume that I have ever encountered.  Lots of fake fur-lined with lined with silk for a head, shirt, pants, spats and mittens.  It turned out adorable and my daughter loved it.  She wore it every Halloween until she out grew it and still has it packed away.  Every Halloween we smile and reminisce about our sweet little Pammy Panda.

I asked the members of the Etsy Christmas In July Team to share stories about their most memorable Halloween costume and feature a costume or accessory from their shop.

Halloween is my favourite holiday!

My favourite costume was a simple one – the Wicked Witch, but it meant my last little dog, Taz, got to be my Toto and went trick or treating with me.

I love making Halloween creations too. It’s hard to pick a favourite but I had great fun making these shrunken heads. They can be worn around your neck – great for any cannibals, warlocks or evil spirits.

When I was eight years old, I dressed as Raggedy Ann in a red checked dress and white pinafore. We purchased the outfit at a Hudson’s department store, near Detroit. It came with a matching doll that we recently sold in our Shop!

I’ve always loved the novelty candles made by Gurley. We found this fun Witch Candle at a recent antique show:

From Nancy Duncan Fellowship at EponasCrystals:

My favorite costume was last year when I dressed up as Janis Joplin. Well, it was an aging Janis Joplin! LOL Bell bottoms, beads. fur vest, huge round sun glasses, and a long streaming head band. Got lots of comments!

These are perfect for a gothic look on Halloween. Earrings with gold tone webs with a black widow spider in the center. 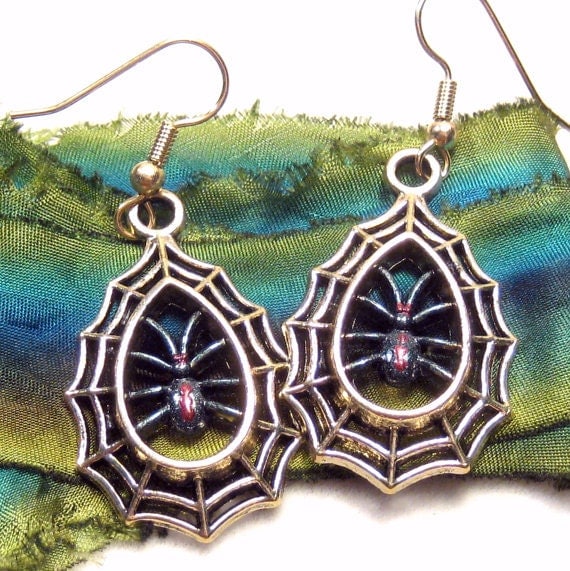 I love dressing up every year… but my favorite costume of all time had to be one that my beloved mother made for me when I was in the 3rd grade! My mom made a Raggedy Ann and Andy costume for me and my best friend to wear and we won first prize at school. Our “hair” was made out of red crepe paper that my mom had stitched into a wig. Later that night when we went out to do our trick or treating, it began to rain and the dye from the red crepe paper went streaming down our cheeks… the end result was a rather scary sight – we looked like we had blood running down our faces! 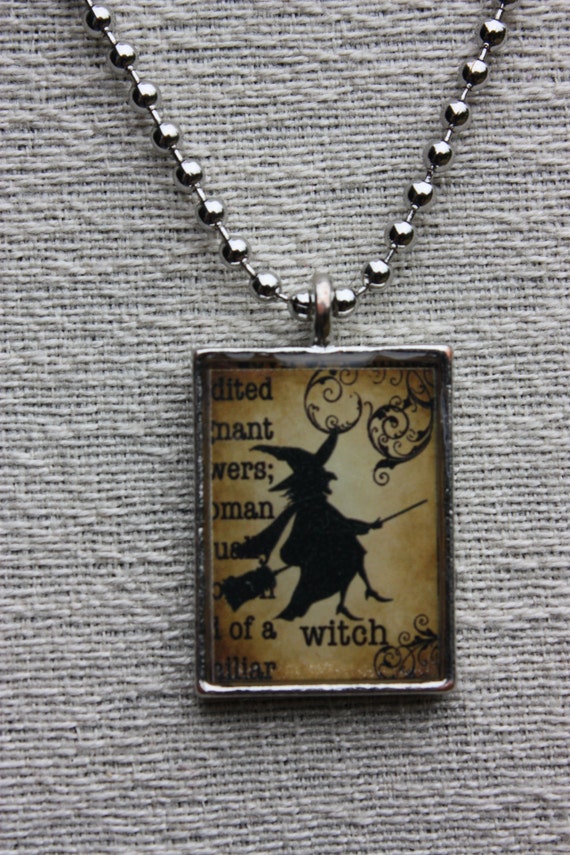 As long as I can remember, I’ve always loved Halloween. I grew up along the bayou of Southeast Louisiana. When I was young, my family would celebrate Halloween with a bonfire. We would congregate by the bayou, dressed in our costumes, and light the bonfire. Then, we would spend the night eating, drinking and telling creepy tales. Looking back, I believe my favorite costume was my black cat outfit that my Mom had made for me. As you can see by my shop name and avatar, I love cats.

I chose to include this poetry art print because the cat is actually my cat/avatar and part of my family. And also she reminds me of my black cat costume. 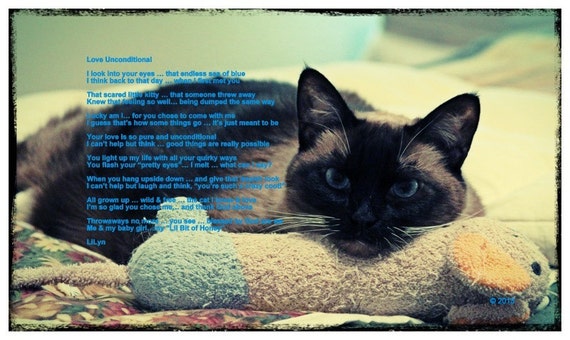 My most memorable Halloween by far was when I was about 10. I had made my own green alien costume out of my older sister’s old Jazz dance costume. We had a Halloween party with lots of friends and had a blast complete with apple bobbing and pumpkin carving and costume contests and spooky decorations like a skeleton candle. Since there are 7 kids in our family and we all invited lots of friends, the place was pretty noisy and festive. At one point we forgot about that darn skeleton candle and the wooden dining room table caught on fire. The fire department came and quickly put it out while we were all standing outside. Which made it the most exciting Halloween party ever for all us kids and our friends, much to my mother’s dismay. It was interesting though how the skirt on my oldest teenage sister’s costume managed to get a little shorter when the fire department arrived. 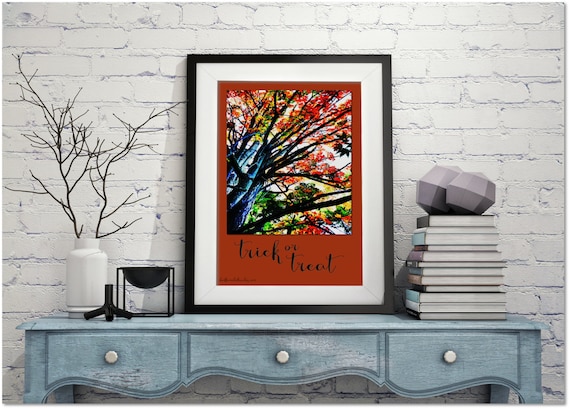 My parents bought a new refrigerator when I was 9, well guess what my costume that year ? I was a computer, I painted the box and gave out printed thank yous when candy was dropped into the slot. It was hard to see thru the holes I got tangled into tree limbs because the box was so tall. My parents love telling me that story of not losing sight of me because of a giant box walking down the street.

Every year our acreage becomes the haunted forest, and we don our headless horseman costume & ride the horses to greet our trick or treaters and the kids love it. It’s annual haunted festival. Each year I create mummy heads for my ghosts and goblin (nieces & nephews) when they come to visit – and now offer them in my shop. How can anybody refuse 1 night a year to be a kid again in costume? 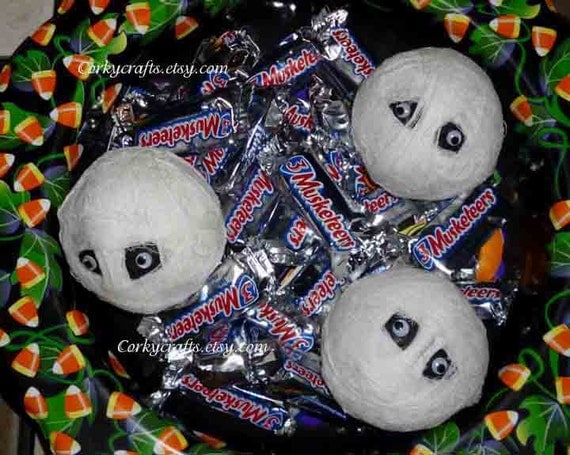 It’s the one day of the year you get to dress up as silly, scary or sexy as you want. Halloween lets us just have some fun with expressing ourselves.

Etsy’s got you covered, as long as you plan ahead and order in time. Here are some unique finds to really set your costume apart from the rest.

As long as we are talking about planning ahead, why not sew your own costume?

A black cape is a great way to start a costume. This one, with its beautiful clasp can transform you into a vampire, a witch or even a medieval lady.  With its versatility you will be able to use it for many years.

If you are like me, you have at least one witch hat in your closet. You know, just in case you need an impromptu costume. If that’s the case add a cat and a broomstick pin and it doesn’t matter what else you wear, you’re set!

Halloween themed jewelry can either add an understated touch to your everyday wear or take your costume to over-the-top levels. Check out these lovely pieces.

These earrings feature Chinese bats, but could be worn all year round. Would be great on a witch or vampire outfit.

You can find all sorts of fun and creative costumes for kids and babies as well, and don’t forget your pets!